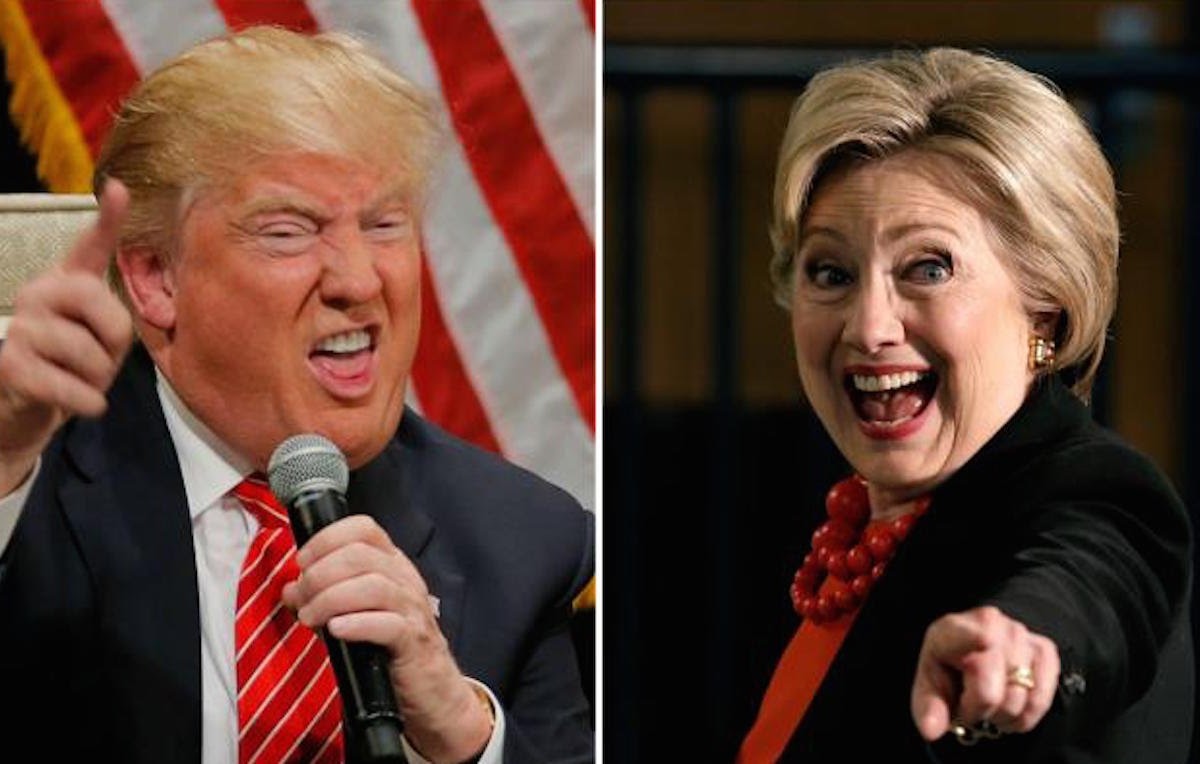 Today is Tuesday, August 30, 2016, which means we’re a mere 11 weeks away from the most mortifying Presidential Election in recent memory.

Contrary to the claims made by Right-Wing, gun-totting, Fox News extremists, Obama is not going to rewrite the Twenty-second Amendment and succeed for a third term. Ain’t no way in hell the House of Representatives and U.S. Senate are going allow that shit. There’s a better chance of Ted Cruz shedding his human skin suit and revealing himself to be the soup guzzling alien we all thought he was.

But even if this preposterous scenario were possible (which it most certainly isn’t), I’m quite sure Barack would decline with the customary response Black people provide when we don’t want to do some shit: “Naw, I’m good.”

And I can’t blame him. After eight years of dealing with bullshit birth certificate claims, utter fuckshit from an inept Congress, and Oompa Loompa John Boehner, Obama’s got more pressing concerns ahead. There’s too much golf to be played and buckets to get. Not to mention ensuring Malia uses her gap year spending the necessary time with Michelle’s side of the family to acquire better dance moves.

While I appreciated Obama’s Presidency, I’m not about to deny him his freedom to walk off into the sunset sporting Chef Curry 2s. Enjoy yo’self, Mr. President.

To be clear, I’m not a huge fan of Hillary Clinton. Honestly, I don’t have any fucks to give about these pointless emails. Frankly, my distrust of her is derived from her propensity to do dumb shit, like claim she frequently carries hot sauce in her purse. In fact, my allegiance to her is mostly fueled by a great desire not to register my children like cattle, or exist in a cadaverous wasteland because some shallow, tyrannical zealot decided to play Battleship with our nuclear launch codes.

Thanks to Donald Trump’s perpetuation of xenophobic, bigoted, and misogynistic rhetoric, not only has he positioned himself as the nominee for the Party of Spoiled Misbehaving Children, but the steroid induced mozzarella stick has also ushered in a new era of radical nationalism. I’d like to call it Bitch-Ass Racism. (Not to be confused with Punk-Ass Troll Racism or Dumb-Ass Racism.)

Yet, it rejects labels such as bigotry and discrimination, choosing instead to be identified as freedom of speech and good ol’ AMERICAN pride. And it gets worse.

Should anyone chide one of these Wypipo on their veneered, racist, bullshit, Bitch-Ass Racists will imprudently cite some nonsensical evidence as proof of their cultural acceptance. Furthermore, for accurately admonishing this bigotry, a person is labeled a racist for rejecting the Bitch-Ass Racist’s principles. The irony would be comedic if it weren’t so damn sad.

That’s an academic way of saying more and more White folks are acting on their suppressed hatred for minorities and justifying its validity under the umbrella of American values, while using White Fragility as a shield from being labeled a bigot.

Take, for instance, 49ers quarterback (and Kappa extraordinaire), Colin Kaepernick. Before Friday’s NFL exhibition game, this brother refused to stand during the national anthem to protest this country’s oppression of people of color–a dissent punctuated by wearing an “X” snapback and a graphic tee featuring Fidel Castro and Malcolm X. (Oh, let the White tears rain down like a hurricane.)

Sure enough, for exercising his innate right, Kaep was bombarded with accusations of being an ungrateful, hypocritical, disloyal American citizen. Some were quick to point out his postgame attire featuring a “Marxist Dictator” and a “Black Nationalist Racist” as evidence of his own ignorant, racist beliefs. It was Bitch-Ass Racism at its finest.

Furthermore, others have foolishly suggested that Kaep cannot stand-up for oppression given his upbringing and massive NFL contract. As if money, being of mixed race, and White foster parents prevent him recognizing the atrocities this country has committed against Black folks. That’s that Dumb-Ass Racism.

Just a few months ago, many of these same people lauded Muhammad Ali as a great American champion and icon in the wake of his death, even though Ali refused to serve in the Vietnam War with convictions similar to Kaep’s. As did Jackie Robinson when breaking baseball’s color line. He’s now regarded as one of the greatest ambassadors of “America’s Pastime.” Again, the fucking irony is maddening.

UPDATE: So not only has the San Francisco Police Officers Association asked for an apology, but the Santa Clara Police Union has issued an ultimatum to the 49ers organization; apologize or we’ll stop protecting your games. This is the most paramount example of Bitch-Ass racism at its finest. It’s white fragility, reduced in threatened egos, wrapped in fuckshit, with a side of privilege and abuse of power, drowned in bitch-assness. Bon appétit!

It’s amazing what ignorance, privilege, and a reliable wifi connection can do. Now more than ever, any white person can recklessly disregard circumspection, offend or disenfranchise unsuspecting Brown people, and hide behind the shield of domestic pride.
But despite the pitiful attempts to camouflage their bigotry with claims of patriotism, I still see them for who they are: chauvinistic assholes, void of original thought, and an unwillingness to recognize the culture of others. Y’all are about as accepting of non-Whites as Rachael Dolezal is Black.

And because I see this shit for what it is, others can too. It’s impossible not to. Unless of course, you’re Stacey Dash, Ben Carson, Clarence Thomas, or any other self-hating Black person in America. There’s no reason for you all to hide. Shed your Bitch-Assness and adopt your feelings of White supremacy. Or you could just stop being a narrow-minded monomaniac and embrace some gotdamn diversity. The choice is yours.